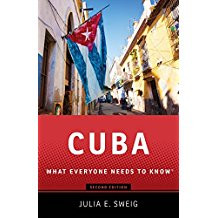 Julia E. Sweig, Cuba: What Everyone Needs to Know (Paperback)

All prices are in USD. © 2020 Center for Cuban Studies