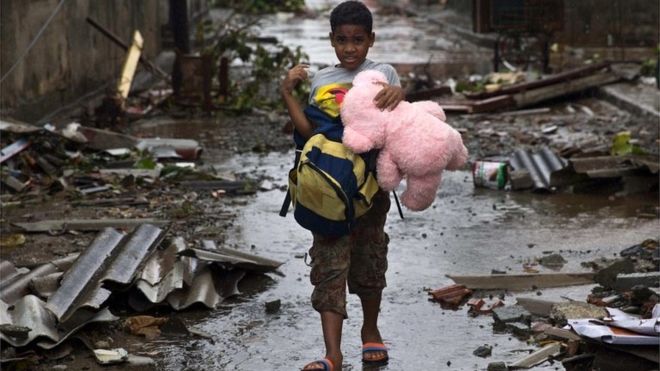 This report comes to CCS via an American journalist living in Havana.  We are joining with other organizations to raise money through the CCS Lifeline Funds for supplies to go to Baracoa via the quickest route possible. Please send donations asap, we'll be publishing a list of donors (with your permission) and amounts (same) and let you know where we've contributed. Global Links is already preparing to send supplies as early as next week. If you send money to the Center (tax deductible donation) please note specifically that the contribution is FOR BARACOA.

I have been waiting all evening to send this preliminary report, hoping I would be able to have communication with the community of San Antonio del Sur in the southern coastal strip of Guantánamo Province that was also among the areas most severely hit by Hurricane Matthew in eastern Cuba.

But phone lines are down and loss of electricity means that cell phones can’t be charged up – so for now I’m sending some information only about the town of Baracoa located on Guantánamo’s northern coast.

The four municipalities of Baracoa, Imías, Maisí and San Antonio del Sur in Cuba’s eastern Guantánamo Province are perhaps the areas that have been most strongly lashed by Hurricane Matthew. A lot of details and images are already available on the Internet – particularly in CubaDebate - about the impact of this hurricane and in the very near future, we’ll know the exact dimensions of the destruction it’s left in its wake.

For the moment, it is important to say that due to Cuba’s incredibly efficient and timely disaster preparedness, its broad and well-organized Civil Defense system, the massive assistance of a hurricane-wise and hurricane-experienced population and a deep commitment by the state to protect human life – first and foremost – there are no reported deaths. Among other things, this is due to evacuation of people living in potentially dangerous areas, such as along the coast and in lowlands susceptible to flooding.

In Guantánamo Province alone, 227,598 people were evacuated of whom

182,281 (80%) were provided shelter in the homes of family and friends – yet another example of Cuba’s characteristic solidarity in times of need - and 45,508 were housed in state-provided and provisioned shelters.

To give you a more personal insight into the impact of the hurricane, I’d like to quote from a phone conversation I received earlier this evening (10/6 at 6pm) from Emercelda, a friend from Baracoa who surprisingly found her phone still working when she briefly returned to her ocean-sogged home - located just across the street from the Malecón (seawall) - to see the extent of the damage. I’ve included some comments in brackets to provide additional information.

“There’s not so much wind right now but there’s still lots of rain.

There’s lots of people walking on the streets right now, shaking their heads and extremely sad about the extent of the damage. Almost every home in Baracoa [where 50,000 of the municipality’s 80,000 residents live] has lost either their entire roof or part of the roof.

“All the wooden houses have been flattened to the ground. Lots of large tanks holding water on top of homes and other structures were knocked to the ground, even those full of water. This happened at our home as well. The waves reached the top of the house [two stories] and completely carried away our roof that was being held down with heavy sand bags.

“Even the solid homes suffered. Along Calle Martí, Baracoa’s main street, virtually all the homes that rent rooms to tourists lost their fronts – doors, windows, walls. Everything taken away by Matthew. Everything has been damaged or destroyed, even strong hotels. Hotel La Rusa lost its roofing tiles and we found its large sign in front of our home, completely blown off! Hotel Porto Santo is gone.

“All the rooms are without a roof. Other hotels lost their doors and roofing tiles as well, even one of the newer ones being built in the city centre. And in front of our house on the Malecón side, we found part of the children’s rides that were swept up by the winds from the children’s playground.

“But people are most concerned about food. Some of the panaderias, our bread shops, have been completely destroyed. The one we use has had its roof completely blown off. The entire city is without electricity as all the electric posts have been knocked down, everywhere. There’s no gasoline. No one can use wood, as everything is wet.

“Some people have a bit of kerosene but of course there’s nothing in the stores to buy and many stores are damaged. Just before the hurricane hit Cuba, stores were selling things like chicken and ice cream for very low prices, as they had no freezers to store and protect them. For my family, I have a bit of kerosene that I’ve taken to my sister’s home, in the neighbourhood of Paraíso, where we’re staying.

“But she has no phone, and we can’t charge up my husband’s cell phone.

We’re also unable to get out of the city to see how my mother is doing, as there’s so much debris and the roads are impassable because of all the trees that have been knocked down, and there’s no gasoline anyway. I’ve heard her home has collapsed but we can’t find out anything for sure.

“Everyone is feeling very isolated. La Farola, the main road over the mountains connecting Baracoa with the provincial capital of Guantánamo, is damaged and transport can’t pass. The bridge over the Toa River has been destroyed so there’s no communication with Moa. This evening’s 8pm news said that of the 200-metre long bridge over the Toa River, connecting Baracoa on the northern coast with Moa in neighbouring Holguín Province, only 50 metres are still standing! Some people have heard on their radios that potable water and food is already being distributed.”

Some electrical workers – linemen and others – who came to Baracoa before the hurricane hit have said it may be two weeks before the city’s electricity is repaired. They said the damage is so extensive it’ll have to be fixed house by house. [An advance group of over 800 workers from the country’s Electrical Union, UNE, coming from Cuba’s western provinces, have been in Sancti Spíritus Province since Monday, waiting to assist with recuperation in the eastern provinces as soon as the hurricane passed.]

“Matthew was a Category 5 hurricane when it left Baracoa. It was stationary for two hours over Baracoa! With 260 km/hr winds. [Reported gusts reached 300 km/hr!] No one here has ever seen such a hurricane as this in Baracoa! It’s so sad to look at the surrounding mountains. It’s as if a huge chain was pulled over them and taken down all the trees! All the mountains are bare! This is one of the most densely forested parts of Cuba! But there are no deaths, no injuries. And we can be proud of that.”

As for the Southern Coastal Strip, though I haven’t yet been able to get direct information, I’ve already heard from friends in Havana who have family living in San Antonio del Sur. In this small community alone, some 60 homes have been completely destroyed and over 100 others partially destroyed.

The nearby Valle de Caujerí, a super productive valley that is the bread basket for this region as well as providing foods for the city of Guantánamo, was completely flooded and lost much of its productive crops. The Sabanalamar River, which passes through the town of San Antonio del Sur before entering the sea, quickly flooded its banks.

In the area of Bate Bate, located to the west of San Antonio del Sur in the same municipality, some 7 km of road were completely destroyed. This is the same road that goes over La Farola and ultimately connects with Baracoa. However, a temporary passage way was quickly prepared and the town of San Antonio del Sur is now connected with the provincial capital.

Tomorrow I should be receiving more news from Baracoa as Emercelda told me there are several other people who want to call me, plus try to find a working computer with enough battery power to send some images. As soon as I get more information, I’ll prepare another little report.

All prices are in USD. © 2021 Center for Cuban Studies